Global pandemic, unprecedented government stimulus, record low GDP report, booming technology stocks and a red-hot IPO market – 2020 has been quite the year – and it is not over! A closely contested U.S. presidential election with record turnout appears to be the final drama that will play out as we head into the holiday season. The anticipated blue wave did not materialize to the extent that pollsters predicted, and as of now, it appears that we may have a split Congress with Republicans keeping the Senate and Democrats controlling the House. That balance of power suggests a lower probability of sweeping legislation, which could be beneficial for financial assets, at least in the short-term. Markets like certainty, and with the potential for legislative gridlock, the status quo is oftentimes the base case scenario.

Ballots are still being counted and possibly recounted in several races, and the official results will certainly have implications for future policymaking. Over the weekend, the major news outlets called the presidential race for Joe Biden and Kamala Harris, and investors are now evaluating what that might mean for markets going forward.

Instead of speculating on outcomes, we would like to highlight a couple notable ballot initiatives that have been decided, but perhaps are not receiving as much attention. There were 120 total measures nationwide on the ballots this week, and the top ten represented around 75 percent of all campaign spending for all 120 initiatives. Two of the major ones included:

Another noteworthy story from this week was the incredible voter turnout. Despite the pandemic and other challenges that Americans faced, over 160 million people either mailed in ballots or voted in person on November 3. Compared to recent history, this was a record in terms of both the number of people voting as well as the percentage of the population that voted. 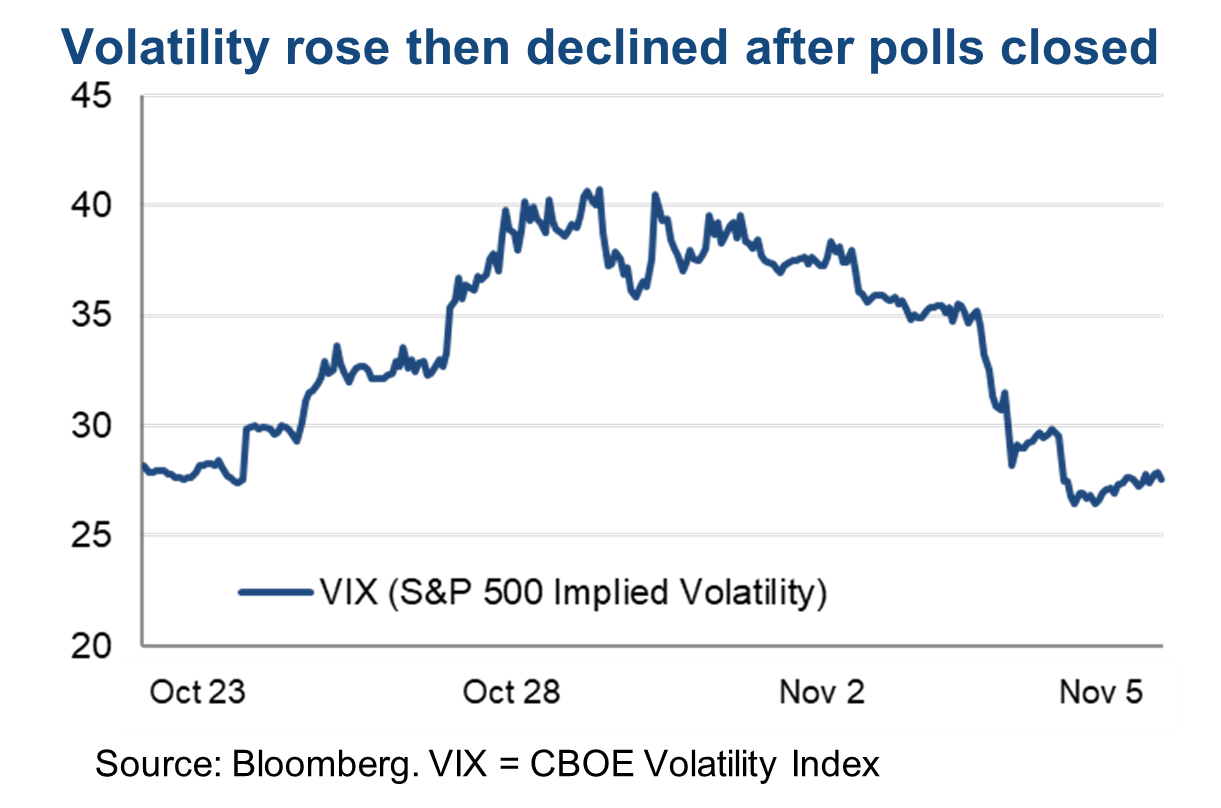 As is typical leading up to elections and other major events, volatility picked up in late October and remained elevated through election day. On Tuesday evening, investors realized the election was significantly closer than most polls indicated just days before. As results came in, it became increasingly more likely that Republicans would retain control of the Senate, and Congress would remain split. Markets rallied on the news, recognizing that it is significantly more challenging to enact meaningful policy change without party control of both the executive and legislative branches. U.S. equity volatility gradually fell over the ensuing days, and U.S. equities generated very strong returns. U.S. Treasury yields fell, most notably further out the curve, amid lower inflation expectations. 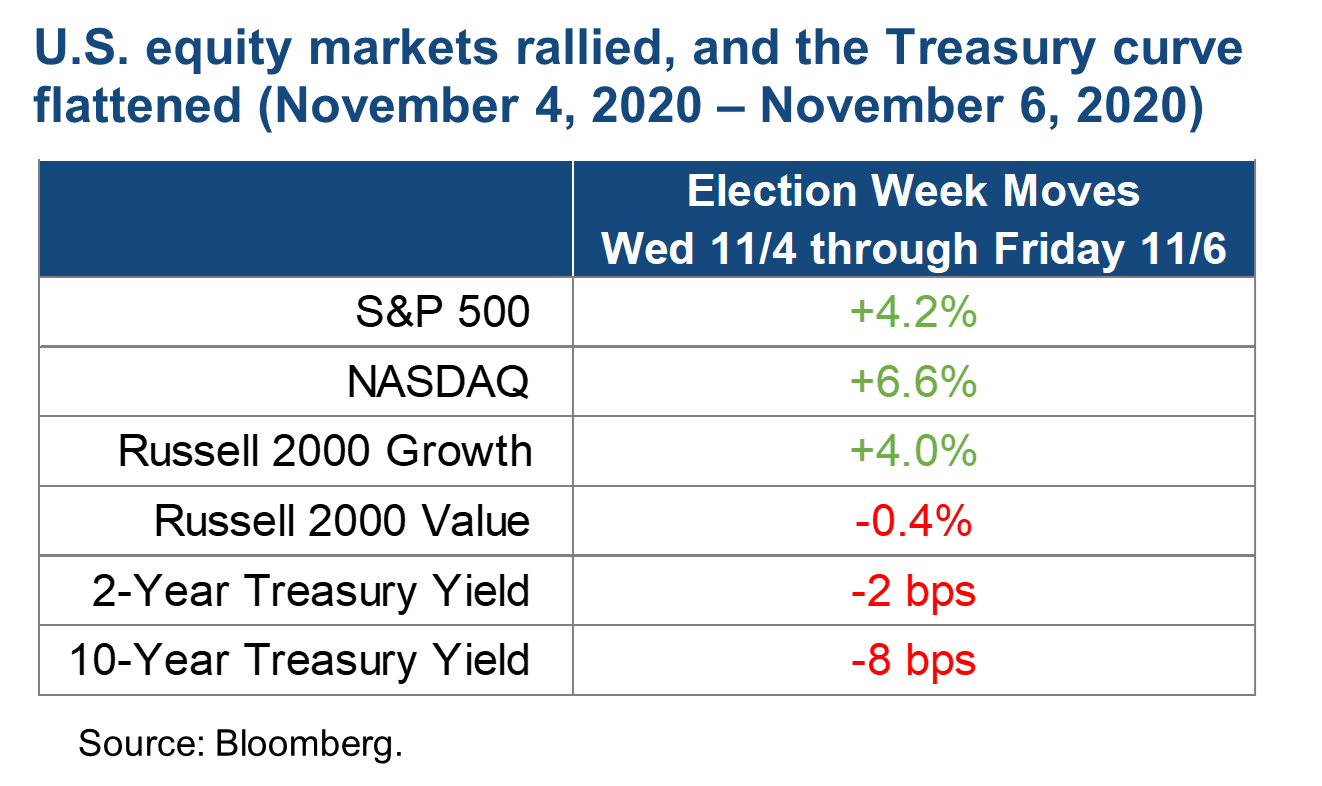 While it did not garner as much attention as usual, we would be remiss to not mention the Federal Reserve’s announcement to leave interest rates and asset purchases unchanged, which was in-line with expectations. Following the announcement on Thursday afternoon, Chairman Powell conducted a press conference, highlighting the positives of the recovery witnessed since March, but cautioning about the forward-looking prospects, particularly in light of the recent spike in COVID cases that could spur more government-mandated shutdowns. Powell refrained from commenting on the election and emphasized the role of the Fed – to maintain stable prices and achieve maximum employment. Powell has consistently noted that it is Congress’ responsibility to handle fiscal policy and the Fed will not play a direct role in those programs.

Once the election results are behind us, it is possible that a fiscal stimulus package will pass before year-end. We will be closely monitoring that development, which would likely have a positive effect on financial assets and support the continued recovery. We encourage investors to remain patient with asset allocations and avoid reacting on emotions in this volatile time. As outlined in our recent article post, What the Election Means for My Portfolio, according to history, presidential party is not a good predictor of future market outcomes. Rather, we advocate for following a structured process that helps manage behavioral biases that may encourage portfolio changes at inopportune times.

VEP is calculated by removing non-citizens and ineligible felons from the voting age population.

This report is intended for the exclusive use of clients or prospective clients of Legacy One Financial Advisors, L.L.C. Content is privileged and confidential. Any dissemination or distribution is strictly prohibited. Information has been obtained from a variety of sources which are believed to be accurate though not guaranteed. Past performance does not indicate future performance. This paper does not represent a specific investment recommendation. Please consult with your advisor, attorney and accountant, as appropriate, regarding specific advice.