While elections are important to any functioning democracy, to investment professionals, elections are primarily significant due to their effect on portfolios. In particular, investors must understand – and anticipate – the correlation between the outcomes of the election and the markets, if any.

Red, Blue or Purple – Does It Matter Who Wins?

It is true that politics can be deeply personal, especially because the issues addressed by both parties extend well beyond capital markets. Additionally, elected officials can enact policies that, for the long term, may impact markets and market returns. However, despite these facts, it seems investors place far too much onus on market returns and their connections with presidential election results. And yet to ask, “Does it matter?”, with regards to the scope of the election results and their impact on the markets, is to take a narrow view of generated returns under different political party leadership for both the White House and Capitol Hill.

First, consider the presidency in terms of the markets and the importance of the executive branch. While it is the highest office in the land, the president is not a solo act. The U.S. and global economies act outside of the U.S. president’s control and the president by design is often forced to work with the legislative branch to enact substantive polices that may have long-term economic impact.

Therefore, keeping this in mind, simply looking at political party based on presidency is too narrow as a frame of reference. Below are historical outcomes and party control noting that markets tend to persevere regardless of party. 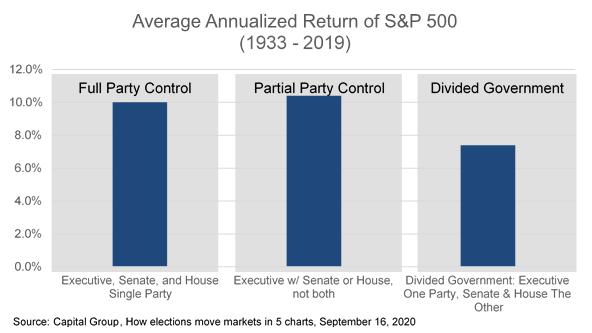 So Why Do Markets Seemingly React During Election Season?

With the following data to support the hypothesis that the markets are resilient to which party takes power, succeeding regardless of the party that is in control, why does it feel like such a critical event to investors every four years during the presidential election?

In short, investors are predisposed to feel like it is. During presidential election years, market volatility tends to increase in the months leading up to the election date as shown on the left. As previously shown, this volatility is not based on definitive evidence affirming that one party is better than the other for market returns. Rather, this heightened volatility is based more on uncertainty.

With investing, just like many other things in life, individuals do not like uncertainty. In actuality, markets often even tend to dislike uncertainty more than they dislike bad news. With bad news, investors can analyze the results and move forward. Uncertainty, in contrast, can leave investors paralyzed or even selling first and asking questions later. While it can be explained, this phenomenon does not require the attention and immediate reaction of investors. Harnessing the knowledge of greater market volatility in an election year is not only helpful to avoid classic behavioral mistakes that can lead to worse portfolio outcomes, but it also reinforces the notion that investors are more likely to be successful if they maintain a long-term point of view.

As the economy – and, indeed, daily life – have seen a tremendous shakeup over the last several months due to COVID-19, you might be thinking 2020 will be different. Actually, with regards to the impact the executive branch will have on long-term market outcomes, 2020 is no different.

The following graphic illustrates delays by state during the primaries in 2020 to collect and post results. As noted previously, markets dislike uncertainty even more than bad news. As everyone tries to get some sleep on the night of November 3, without a clear winner, uncertainty will likely unsettle countless investors. Given this is a real possibility, investors should expect additional volatility leading up to the election and potentially the weeks following. It might be a good idea to harness history and legal precedent with assistance illuminating a path forward should such uncertainty arise.

Washington Post: Election Night 2020 Could go on for Weeks – Just Look at the Primaries 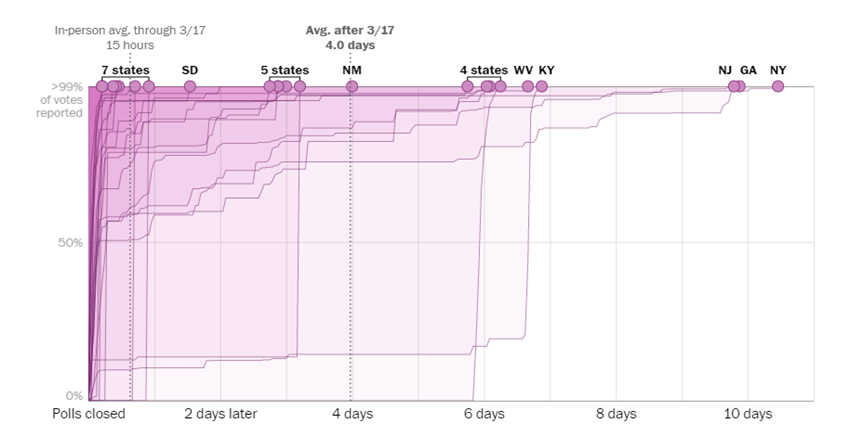 Delayed election results are not unprecedented. There have been three moments in history when the presidential election faced an unusual prospect concerning election results, the most recent being the 2000 George W. Bush vs. Al Gore election in which Florida ballots were being recounted due to “hanging chads”. While markets did sell off after the 2000 election, the opposite occurred during the 1960 election when the John F. Kennedy vs. Richard M. Nixon election results were contested. Again, this draws attention back to prevailing economic conditions rather than the singularity of the election.

Regardless of the reason for delay, states will proceed with their established voting guidelines to elect a winner by December 8. This allows time for the Electoral College to then vote on behalf of the citizens it represents for the next president on December 14. For a president to be elected by the Electoral College, a candidate must receive 270 votes. Should for whatever reason the Electoral College not be able to accumulate 270 votes for a single candidate, then the 12th Amendment to the Constitution assists to transition power from the sitting president to the next according to the anticipated timeline of an Inauguration Day on January 20, 2021. 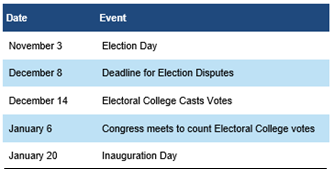 Uncertainty is uncomfortable. Investors deal with uncertainty every day as there is no guarantee of future outcomes. Elections are another cog in the wheel of uncertainty that adds to uneasiness regarding investor portfolios and the market. However, with an extensive knowledge and understanding that heightened volatility will be likely during such times, procedures exist to resolve any disputes arising from these tumultuous times and markets are not disproportionally benefited by the victory of one party or the other, therefore we advocate patience.

Maintaining a thoughtfully designed and disciplined investment strategy meant to weather changing political regimes, economic conditions and a myriad of other adverse situations that result from these elections is, in our opinion, the best way to succeed over the long term.